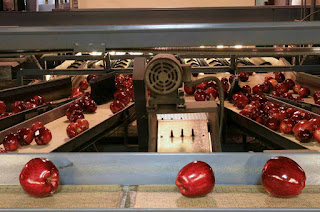 Last month, the Michigan-based company, North Bay Produce, voluntarily recalled over 2,000 cases of fresh apples due to potential Listeria monocytogenes contamination. The recall affected a number of varieties including Fuji, Honeycrisp, McIntosh, and Red Delicious. The apples were shipped from one North Bay Produce packinghouse to wholesalers, retailers, and brokers in Florida, Illinois, Kentucky, Louisiana, Michigan, North Carolina, Texas, and Wisconsin. Thankfully, to date, health officials have not linked this recall to any reports of illness. With so many occurrences like this one in the news, ClorDiSys Solutions’ objective for 2020 is to further explore the control of spoilage organisms and pathogens on food products in order to help deliver a safer product to consumers.

ClorDiSys Solutions has always been a company driven by research.  Starting with chlorine dioxide’s effect on organisms within the environment, we've implemented those findings into our operations to better maintain safe food processing environments. Next year, we would like to focus on working with the FDA to obtain approval to decontaminate individual food items in order to control spoilage organisms and other pathogens that cause foodborne illness. We have been approved to treat blueberries and potatoes, and our company is currently exploring the treatment of walnuts and apples. ClorDiSys has also done preliminary research on other food types including seeds and grains.

If you’re interested in new methods to control spoilage organisms and pathogens on product within your supply chain, contact us to start a conversation.  We have a number of solutions within our company which may help including liquid chlorine dioxide, ultraviolet light, and gaseous chlorine dioxide. We have a few food contact notices involving chlorine dioxide currently, which can be read about here. With partnerships to many food safety experts and laboratories throughout the world, we provide a global network to take on any challenge.

Establishing Sterility in a New Facility

ClorDiSys' decontamination services take place primarily for contamination response, commissioning of new construction or renovated spaces, and routine preventive decontamination. The majority of what we do are large areas and entire facilities to get rid of widespread contamination problems and really give a baseline sterilization mark. With years of experience across a wide variety of industries and facility ages, we have a number of tricks and options to accommodate any project.

Recently our Decontamination Service team helped a biomedical research client who was moving into a larger building previously occupied by another company.  The building was renovated in order to handle the needs of the client, with a new ventilation system installed as part of that renovation.  Equipment was moved in from their previous location, and the ventilation system was balanced.  As the last step, the facility would undergo a chlorine dioxide gas treatment to provide a 6-log sterilization level kill before officially opening for research.  This enabled all of the equipment to be sterilized along with the building.  This is safer and faster than autoclaving everything in, as that process cannot be used on animal rack filters and most electronics.  Those materials typically do not receive a high-level decontamination if chlorine dioxide gas isn’t utilized as other liquid based decontamination methods are similarly incompatible.  The decontamination took place over the course of an 8-hour shift, with all process parameters being met to achieve the targeted 6-log sporicidal reduction.  Afterwards, the client was safe to start occupying the facility and begin their research.

Generally speaking, if the space can be sealed, it can be decontaminated. Some of the more common applications are buildings with unique layouts and multiple floors, processing and production areas, HEPA housing and ductwork, cold rooms, even tented pieces of equipment. If you are interested in exploring a decontamination service project for your facility, click here.
at November 20, 2019 No comments:

Listeria monocytogenes' ability to survive in extreme conditions and form biofilms on various surfaces is a significant challenge for food safety. Last week, members of our Decontamination Service team helped a ready-to-eat food facility win the fight against l. monocytogenes. Treating an area just shy of 1,000,000 ft3, the service team completed the decontamination in just two days thanks to a very helpful in-house staff.  The first day consisted of sealing the space from the surrounding areas and sealing the ventilation system off at the roof.  Chlorine dioxide gas generators were setup with tubing run to various locations within the space to speed up the natural gas distribution.  50 biological indicators, all containing over a million bacterial spores, were placed at locations chosen by the facility's Quality Assurance and Food Safety personnel.  The decontamination itself took place on the second day, with gas concentrations being monitored continuously throughout the process from multiple locations throughout the space.  Once the final sampling location eclipsed the target dosage, the decontamination was deemed complete, and the gas was aerated from the facility.  Once the gas was removed and the area was safe for reentry, our team retrieved our supplies and packed them up.  Biological indicators were recovered and processed the next day to check for growth.  After 36 hours of incubation, all biological indicators were negative for growth, capping off a successful decontamination.
at November 13, 2019 No comments:


“They’ve known for 34 years and they willfully pumped this out in our communities ...,” said Jeanne Hochhalter. "Nobody should have to go through anything like this." Hochhalter, who grew up in Burr Ridge, was one of 32 people who filed suit in the Circuit Court of Cook County this week against Sterigenics, which has a plant in Willowbrook where medical instruments are sterilized. In February, the Illinois Environmental Protection Agency shut down the facility after air quality monitoring recorded spikes of the gas ethylene oxide in surrounding neighborhoods (Esposito 2019).

Despite the environmental concern and public outrage, Sterigenics was allowed to reopen the Willowbrook facility in July.  However, the risk is still found in ethylene oxide sterilization.  In 2016, EPA published an updated Information on the Integrated Risk Information System determination which classified ethylene oxide to be a carcinogenic gas. Now, there is a consideration for an alternative sterilization method to be found, however due to the high level of use, it will be a great feat to switch, plus there is a risk of not having the proper ability to handle the workload either.

Ethylene oxide currently bears the brunt of the medical device sterilization in the country:


Currently, ethylene oxide is used to sterilize more than half of medical devices that need sterilization due to its chemical compatibility with many different device materials and ability to treat devices that are heat- or moisture-sensitive.

The second most common method to sterilize medical devices is radiation, such as gamma irradiation, X-ray radiation and electron beam radiation, which collectively represents about 45% of devices currently being sterilized.

The other common method currently is using pressurized steam, constituting about 5% of sterilization, according to FDA (BioMed Tech, Lim, 2019).

The FDA organized regulators from public health agencies, medical device manufacturers and expert physicians gathering Wednesday November 6th and Thursday November 7th at a two-day meeting to discuss how to address challenges with ethylene oxide. The FDA is looking to determine if there is a viable alternative for large scale medical device sterilization. There are many determinants, but one is if there is an elimination of ethylene oxide, what the FDA can do to prevent device shortages if reduced sterilization capabilities come to pass. New concerns present many challenges to an industry, but offer many opportunities for advancement in the possible use of even greater technology as well.

ClorDiSys Solutions Inc’s Director of Operations, Paul Lorcheim, is a panel member presenting an alternative sterilization technology method, chlorine dioxide.  Chlorine dioxide has long been determined safe for use on medical devices, particularly because it does not leave residues and it is an EPA registered sterilant. The FDA has the webcast day one of the meeting here, and day two is webcast here.