Many food and pharmaceutical processing plants work with dry powder products, which are conveyed throughout the facility in piping systems from vessel to vessel and into the finished product package.  These product conveyance (PC) lines need to be disinfected in a careful manner which ensures that they are completely dry before product is reintroduced.  If a liquid disinfectant is introduced, it can bind with residual product to form crusts and hard biofilms.   ClorDiSys uses dry, chlorine dioxide gas to decontaminate piping systems and has performed many successful treatments within both the food and pharmaceutical industries. 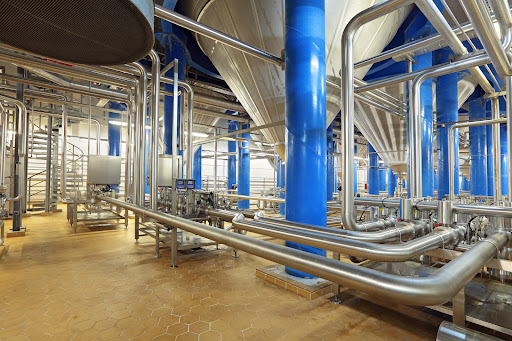 Chlorine dioxide gas works extremely well for this application because, as a gas, it is able to move freely through the piping system and all the bends and turns throughout.  Gasses do not condense or stick to surfaces like liquids and liquid based vapor methods would, they simply continue to travel down the line and fill up the entire system.  To speed this process up, a recirculation loop is traditionally set up to connect the inlet and outlet of the system and provide an airflow within the closed loop.  Chlorine dioxide gas is able to be accurately measured throughout the entire process, typically being measured at the very end of the loop upstream of the gas injection location.  This allows for excellent process control, as the decontamination process continues until the proper dosage has been met, rather than end after a preset time.  This allows the decontamination process to be validated to a particular dosage, which can be reliably and repeatably met every time.  As a process which can be validated, chlorine dioxide gas can be used as a clean break within the PC lines, allowing for a true microbial reset of the environment.
Another main benefit for the use of ClorDiSys dry generated chlorine dioxide gas comes at the end of the treatment. CD gas is safe to vent to the atmosphere, allowing tanks and piping systems to be vented to exhaust at the end of the cycle.  Our proprietary pure chlorine dioxide gas does not leave a residue, making it ideal for product contact surfaces such as PC lines.  For such a critical part of the production process, it is essential to use an effective sanitation method.  With treatment times ranging from 4-8 hours depending on the complexity, decontaminations can be implemented as part of scheduled downtimes and occur at varying frequencies to provide greater assurance that the product being conveyed is safe.
To learn more about PC Line Decontamination, join our webinar on August 19th.
at July 26, 2021

Using UV-C for Routine Disinfection within the Life Science Industry

Ultraviolet light disinfection technology is commonly used for the routine disinfection of rooms within the healthcare industry.  It is seen as a quick disinfection method for prominent surfaces within patient rooms, ICU units, and surgical suites. This same technology can be used within the life science industry to disinfect animal holding rooms, procedure rooms, and necropsy rooms quickly on a routine basis.

UV light is capable of providing high-level disinfection of viruses, bacteria, molds and spores.  UV light works faster the closer it is to the pathogen, as its strength (intensity) is higher closer to the light source.  It is a dry, residue-free disinfection process that is easy to perform and requires very little maintenance.  UV light does not penetrate well into cracks and crevices, and it doesn’t reflect or bounce off surfaces in a meaningful amount.  This leaves UV as a line-of-sight disinfection method who’s use should be focused on common touch points.  These locations are where contaminations are traditionally transferred, making a routine disinfection of these surfaces a worthwhile occurrence.

Within the life science industry, UV can be quickly and easily used to help disinfect animal holding rooms, necropsy rooms, gowning rooms, equipment passthroughs, procedure rooms and hallways.  When using our Torch UV system, visible surfaces within an 8 ft radius can be disinfected in under 2 minutes, depending on the organisms of concern.  For more information, read our UV Light Data Sheet or contact us at 908-236-4100 to learn more.

Chlorine dioxide (CD) gas is now being used for the sterilization of medical devices.  Over the past two years, extensive testing has been done to learn more about its limits within the medical device sterilization market.  Some of the testing was done in partnership with a leading medical device manufacturer who was looking at new technologies which could replace Ethylene oxide (EO) for certain medical devices types.  This testing pushed the boundaries of what conditions CD gas was known to be effective within, and we’ll be discussing that in our upcoming free webinar on July 15th that you can sign up for by clicking here.

Ethylene oxide first began its tenure in medical device sterilization in the in the 1950’s.  EO was favored due to a lack of sterilization options for heat and moisture sensitive medical devices, gaining popularity due to its ability to penetrate packaging materials and device lumens, its material compatibility, as well as ease of use.  However, EO soon began facing challenges.  In 1987 Ethylene Oxide was determined to be a carcinogen by California.  In the following years the National Institute of Occupational Safety and Health (NIOSH) studied more than 18,000 workers at 17 sterilization plants and concluded that EO causes breast cancer and lymphomas.  In 2006, and after reviewing NIOSH studies, the EPA released a draft of its review of EO and determined it is a human carcinogen. Pressure peaked in 2018 with lawsuits stemming from claims an Illinois plant’s EO emissions resulted in many incidents of cancer throughout the community.  This pressure resulted in major facilities closing down and forcing added strain on others.  This resulted in increased wait times and overall fears from manufacturers as well as the FDA that the threat of a lack of alternatives besides EO could mean critical medical supplies may not have a mode of sterilization available to them. 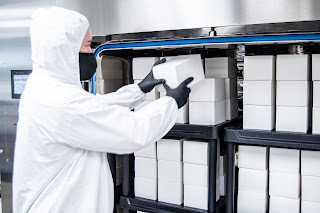 Overall, critical disadvantages associated with EO are the lengthy cycle time, cost, and its potential health dangers.  Another serious issue is that EO can be explosive, creating a risk for sterilizing devices with embedded batteries. EO’s overall risk profile prevents many medical device and pharmaceutical companies from having in-house EO sterilization chambers due to the complexity and safety complications EO sterilizers result in.

Chlorine dioxide gas is a near identical replacement to ethylene oxide in terms of cycle structure and effectiveness.  Chlorine dioxide is non-carcinogenic, non-explosive, and cycles can be completed within one chamber, allowing for a simpler sterilization process.  Gaseous chlorine dioxide is a non-carcinogenic, EPA registered sterilant.  Since it is a gas, the chlorine dioxide molecules will fill the entirety of a space and reach all areas of a component while retaining high material compatibility.  Without the risk of explosion, CD gas is able to sterilize devices containing embedded batteries.  Recent testing proved its ability to sterilize devices within packaging, which was thought to be prohibitive in the past.  The simplicity of the process also allows firms to install and utilize in-house CD gas sterilizers which can help expedite processes and reduce costs.  We have recently registered as an FDA medical device contract sterilization facility (FDA registration number 3013115071), allowing medical devices to be sterilized at our facility before being returned or shipped out to their next location.

Join us on July 15 forour free webinar to learn more.