ClorDiSys has done studies with electronics and found that they stand up well after multiple exposures. Computers have been exposed to the gas for over 25 cycles and have been fully functioning afterward. In fact, chlorine dioxide gas was chosen to decontaminate the inner chambers of a $3,000,000 Transmission Electron Microscope over hydrogen peroxide vapor because of its superior material compatibility as proven through manufacturer testing. The US Environmental Protection Agency (EPA) commissioned a study exposing computers to chlorine dioxide and hydrogen peroxide over the course of 6 months. Below are the test results showing chlorine dioxide had the lowest amount of failures. 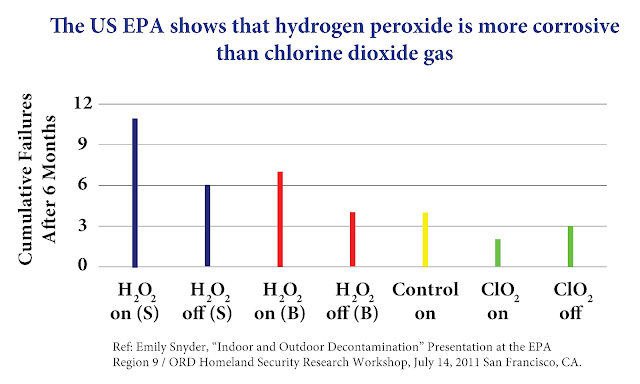 Not all chlorine dioxide gas products are the same, and we understand the hesitation considering some of the information available regarding corrosion.  That’s why we offer free* material testing to give confidence that our chlorine dioxide gas will be safe on your materials and sensitive items.

* Testing is free for a reasonable amount of items.  Shipping not included