Case Study: Decontamination of an ABSL-3 Facility and its Ductwork

A university’s ABSL-3 area was set to be renovated.  The laboratory had been used for research with tuberculosis (TB) and needed to be decontaminated before it could undergo extensive renovation. The associated ductwork also required decontamination prior to demolition of the existing exhaust system.  Removing contaminated ductwork is a complicated and difficult task, and it proved easier and more cost effective to decontaminate the ductwork along with the laboratory prior to removal of the existing ductwork. Current decontamination methods for rooms include manual spraying and wiping with chemical disinfectants or the application of formaldehyde gas, hydrogen peroxide vapor, or chlorine dioxide gas. When ductwork is also involved in the decontamination, the methods that are practical for implementation become more limited.

The manual spray/ wipe method was ruled out very quickly. Personnel must spray each and every surface with the decontaminating agent, ensure sufficient coverage with the sprayed liquid, allow the agent to remain on the surface for the specified contact time (typically 10-20 minutes), and then wipe the surface. This method seems extremely prone to human error, especially when considering the difficulty in accessing every interior surface in the ductwork. Formaldehyde gas was considered as a possible method as it is effective over a broad range of organisms, has relatively low cost, and can effectively reach applicable surfaces due to its gaseous properties. However, formaldehyde is listed as a potential carcinogen by the U.S. EPA and as carcinogenic to humans by the International Agency for Research on Cancer. It also requires neutralization and manual wiping of the potentially harmful neutralization byproduct, consisting of paraformaldehyde and/or the neutralization product. Vapor Phase Hydrogen Peroxide (VPHP) was another method evaluated. VPHP is an effective sterilant under ideal conditions but has the potential for inconsistent distribution where temperature gradients exist or where small areas (like the inside of ductwork) trap the movement of vapors and create condensation. Additionally, VPHP has been known to break down upon contact with galvanized metal such as that used in this project’s ductwork. These potential drawbacks led project leadership to seek other options.

Chlorine dioxide gas (CD) was evaluated. It is not carcinogenic and does not leave a residue.  It has a yellowish-green color, which allows its concentration to be precisely monitored and controlled by a UV-VIS spectrophotometer.  This permits effective process control of the decontamination cycle, because concentration parameters can be established and validated.  CD has broad biological efficacy and has been approved for use as a sterilant by the US EPA.  As a gas, CD is not susceptible to temperature gradients, and CD does not condense at typical ambient temperatures or upon contact with the metals found in ductwork. As such, ClorDiSys Solutions, Inc. was selected for the project using chlorine dioxide gas.

After evacuation of all occupants, animals and disposable supplies from the area, the HVAC system was modified to allow for containment and re-circulation of CD. The decontamination process consisted of a humidification phase where steam generators were placed in the areas to raise and hold 65%-75% Rh for over of 30 minutes. Once the areas were humidified, the steam generators were shut off, and the gassing cycle was initiated. The cycle progressed until the concentration reached the target concentration of 1 mg/liter (360 PPM). This was achieved in approximately 75 minutes. At this time, the gas source was turned off, and the concentration held in the areas for a minimum of two hours, achieving a minimum exposure of 720 PPM-hrs. After the two-hour contact time, aeration was initiated by temporarily reconnecting the room exhaust duct to the building exhaust riser. The aeration continued until the CD levels were below the detection level of the concentration monitoring system. When the levels within the project area were at or below 0.1 PPM, (approximately 20 minutes) the areas were entered.

The results of the decontamination cycle were successful and yielded a total dosage greater than 1090 ppm-hour exposure of chlorine dioxide gas.  This level is more than adequate to provide a 6-log sporicidal reduction referenced in various published sources.  Demolition of the ductwork started the next day.

ClorDiSys Solutions’ gaseous CD is the safest and most effective way to decontaminate your BSL-3 and BSL-4 laboratories, passthroughs, chambers, biological safety cabinets, HEPA filters and any other lab spaces. To learn more about our process and its applications, click here.
at December 18, 2018

The Flash Tunnel is an ultraviolet light (UV-C) disinfection conveyor system designed for use in any setting, particularly catering to the n... 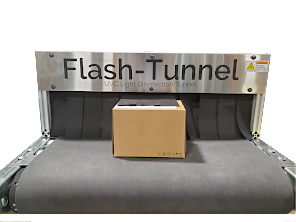