The Myths and Misconceptions of Chlorine Dioxide Gas

Chlorine dioxide gas has been recognized as a disinfectant since the early 1900's, and it has been approved by the US Environmental Protection Agency (EPA) and the US Food and Drug Administration (FDA) for many applications in a variety of industries. It has been demonstrated effective as a broad spectrum, anti-inflammatory, bactericidal, fungicidal, and virucidal agent, as well as a deodorizer. Even though chlorine dioxide has been around for over a century, there is still a surprising amount of inaccurate information and misconceptions. We would like to take the opportunity to address some of those misrepresentations.

CHEMICAL PROPERTIES
Although chlorine dioxide has "chlorine" in its name, its chemistry is radically different from that of chlorine. When reacting with other substances, it is weaker and more selective, allowing it to be a more efficient and effective sterilizer. For example, it does not react with ammonia or most organic compounds. Most importantly, chlorine dioxide oxidizes products rather than chlorinating them, eliminating the formation of trihalomethanes (THMs), haloacetic acids (HAAs) and other environmentally undesirable chlorinated organic compounds.

SAFETY
The very reason decontaminating agents are used is for the purpose of killing organisms. As such, no agent can truly claim to be safe. However, chlorine dioxide gas is the safest fumigant available, due to its physical attributes and process advantages. Chlorine dioxide is not classified as a carcinogen by any health agency. Chlorine dioxide does have an odor similar to chlorine, which is beneficial because chlorine is such a recognizable smell. The odor detection level is very similar to the OSHA 8-hr safety level of .1 ppm allowing you to detect any gas leakage quickly. Cycle times are shorter with CD gas due to its faster aeration time to safe levels. This means that a potentially unsafe condition exists for a far shorter time when using CD for room decontamination.

MORE COMMONLY USED THAN YOU THINK
Chlorine dioxide is widely used as an antimicrobial and as an oxidizing agent in drinking water, poultry process water, swimming pools, and mouthwash preparations. It is used to sanitize fruit and vegetables and also equipment for food and beverage processing. It is also employed in life science research laboratories, pharmaceutical facilities, and the healthcare industry to decontaminate rooms, passthroughs, isolators, and ductwork as well as product and component sterilization. It is also extensively used to bleach, deodorize, and detoxify a wide variety of materials, including cellulose, paper-pulp, flour, leather, fats and oils, and textiles. Approximately 4 to 5 million pounds are used daily.

Planning for the Safe Return of Employees and Customers Post-Pandemic

Across the globe, countries are beginning to phase into what will be their new normal after the COVID-19 pandemic. In the United States spec... 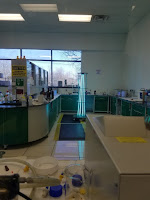