Microbial contamination of food production facilities continues to be a challenge for the industry and can present a significant health hazard to human safety.  Sanitation after a contamination is hugely important, but preventive decontamination is equally significant and can reduce positive swabs in the future. Many times, bacteria are able to survive simply because of limitations of the cleaning method utilized by the sanitation program. By taking greater preventive measures, risk of microbial issues can be minimized or eliminated. Performing an annual “deep clean” of your facility by decontaminating it with chlorine dioxide gas allows for a true reset to zero pathogens.

In order for any decontamination method to work, every organism must be contacted by the agent, for the proper amount of time and at the correct concentration by an agent effective against that organism. Common sanitation methods like steam, isopropyl alcohol, peracetic acid, bleach and ozone have a limited ability to reach all surfaces within a space, and some are incapable of killing all microorganisms. 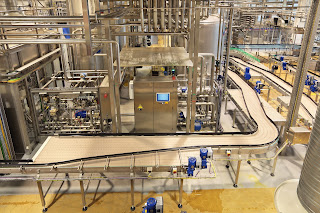 Failure to eliminate all pathogens will result in recontamination over time as surviving pathogens have time to multiply to large enough numbers where they can be transferred to other locations in the facility and cause a more widespread contamination. These recurring contaminations cost more money in the long run, especially if they are discovered by FDA and USDA inspectors. Chlorine dioxide gas has been proven to be a successful decontaminating agent capable of killing pathogens in areas that other sanitation methods fail to reach. Effective in both dry and wet conditions, chlorine dioxide gas has been used by the dairy, produce, meat, grain, spice, frozen, and beverage industries.

Preventive decontamination is essential, and chlorine dioxide gas offers the process advantages to reduce the risk of contamination and recall. An example of this would be a dairy powder processing plant had been decontaminating their production environment with chlorine dioxide gas annually for the past few years. Over this time, the facility made improvements to its equipment and the building itself in order to mitigate some of the issues that were uncovered after resetting the plant’s microbiome.  In one instance, the facility was able to trace a new contamination to a minor water leak into their plant.  More recently, it was determined that the environment was in much better control than in previous years as no pathogens were found in the environment.  With that information, the ClorDiSys service team entered discussions with the facility to amend the scope of the decontamination. Instead of treating the entire production environment, the decontamination would focus on the tanks and piping system up through to the packaging equipment.  This strategy enabled the facility to save both time and money as the treatment volume was dramatically reduced, while still acting as an annual sterility marker.

To learn more about the benefits of an annual decon, join our webinar on June 24 at 1pm Eastern.