Using the Flash-Thru as an Alternative to Spraying and Wiping

In the Pharmaceutical, Biotech, Life Science, and Medical Device industries, companies need to produce product and perform research in areas with a high level of sterility. To do so, product manufacturing and testing occurs in expensive cleanrooms.  High amounts of attention are given to maintaining the cleanroom environment and often require personnel entering the cleanroom to undergo rigorous gowning procedures.  However, transporting in supplies & equipment into the environment brings forth added challenges.  Spraying and wiping items in order to disinfect them is the method commonly used, however this method is unreliable and inefficient.  Unsuccessful disinfection often occurs due to human error, insufficient chemicals used, inappropriate dwell time, or any number of other factors.

When determining if a chemical agent is appropriate, there are several varieties; sporicides, disinfectants, sanitizers, and antiseptics.  All have very different intended uses and may or may not be appropriate for the application in mind.  If a chemical agent is chosen based on the application it is intended for, then one has to consider the necessary dwell time.  To illustrate the importance of dwell time, an example can be given of the extensive dwell time of bleach being over ten hours on a surface.

Even if the proper contact time was achieved and personnel feel as though they are doing a good job, the manual procedure of spraying and wiping poses risk of not reaching all areas of an item that may harbor organisms.  Areas are often not considered, or not treated with appropriate attention which leaves contamination still present. 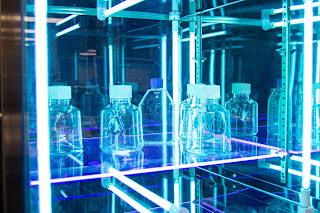 However, another tool that can be used is Ultraviolet light (UV-C).  The major advantage to UV-C disinfection is the efficacy and the minimal time it takes to achieve that level of kill.  It is a fast, simple to use method that is capable of providing a 99% reduction of spores within minutes without chemicals.  This allows for little concern over material side effects due to the lack of dangerous residues needed to be wiped down or neutralized afterwards.  UV-C kills everywhere that the light is shining, meaning all exterior surfaces will achieve disinfection.  The limiting factor is if objects are sitting on a surface due to an inability to get 360 degrees of light exposure.  However, materials such as a quartz glass shelf placed within a UV-C chamber can alleviate that concern due to the penetration capability quartz glass has in comparison to most other materials.  An example of a device that complies with the needs of a cleanroom is the Flash-Thru UV-C disinfection pass-through.  The chamber is installed within a wall to allow for items coming into the cleanroom to be disinfected immediately prior to entry.  From the non-sterile side, one of the two UV-C protective doors is opened, then the user places the item(s) on the quartz glass shelf, assuring not to stack items, then the start button is pressed.  Depending on the target organism, kill can be achieved even as little as 30 seconds.  Once the lights cease, the opposite door located on the cleanroom side can be opened and the item can be retrieved.  This method of disinfection is appropriate for many applications, but especially electronics that are entering the space because it is very gentle and will get successful kill on items that would normally not be disinfected appropriately, or could be harmed with use of a chemical agent.  Cellular phones, pagers, tablets and computers are all examples of technology that would be pertinent to treat in this manner. 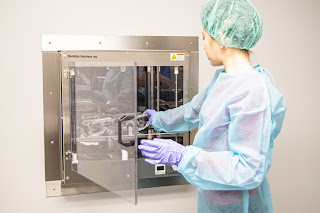 To better illustrate the inefficacy of spraying and wiping surfaces alone, Animal Resources Centre in Australia performed various tests to better realize the inadequacies spraying and wiping resulted in.  In the testing below, organism colony counts were measured at three separate intervals.  Initial swabbing prior to any cleaning, secondary swabbing after spraying and wiping, followed by a final colony count after ultraviolet light was used in the space.  Completing the traditional cleaning eliminated many organisms, however many were still present.  The addition of ultraviolet light eliminated almost all remaining organisms that were still in the environment.  This experiment shows that ultraviolet light technology has the capacity to reach many areas that are often missed by humans, and can do so in a highly effective manner.
at May 03, 2021